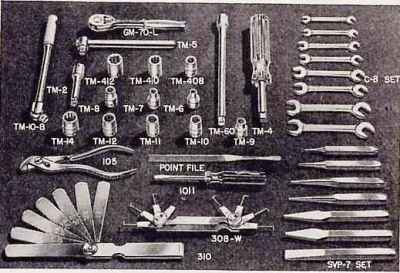 In 1945 the 9/32 inch drive set was replaced in its entirety with the ¼ inch.  Snap on reintroduced basically all the 9/32 inch pieces in ¼ inch.  This resulted in 4 sets (actually 3 complete sets and a new box to put a complete 4th set together).  These were

The TM-130 Midget Utility Set. This was 11 sockets, 4 hands and 2 extensions along with pliers, wrenches, drifts sets and 2 feeler gages.  It is interesting how they describe the utility as being for “garage or service stations, airline departments where small machines or instruments must in assembled or serviced, Others who have found this set the answer to their tool problems are Movie Cameramen and projector operators… typewriter, Dictaphone and other office machine service men…sewing machine, radio and other electrical repair shops.. Gas, water and electric departments, etc, in fact, everyone….,” 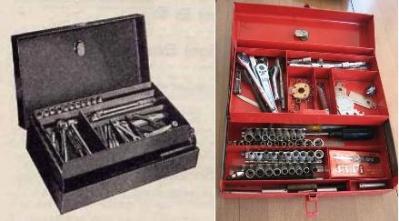 TM-130 set in a new case, The TM-130B Hold all. This was the same tool set, but the case with a unique sliding draw had a long production run – through the 1960s.  The top shelf slide back, over the lid, when open. The replacement boxes all had removable top shelf, or slide forward as a draw. 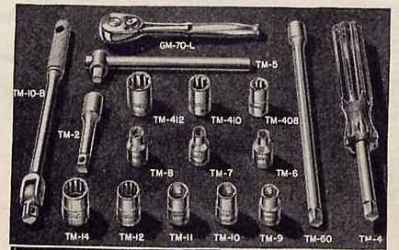 The TM-120 Midget Set which is the same set minus the non-socket parts. It came without the T handle (a piece that was dropped with the end of the 9/32). The boxes, outwardly identical to the 9/32 box, internally all have different dividers. 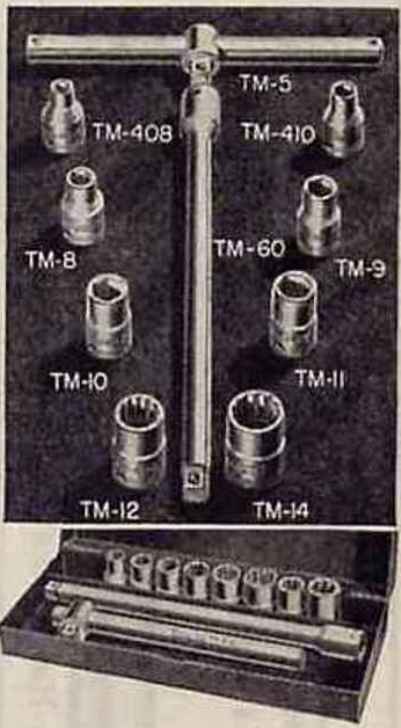 The TM-110 which shows a T handle, constructed out of a sliding T and an extension. This came with 10 tools: 8 sockets, the extension and the Sliding T.

People like you make “collectingsnapon” work. Where I had or have access to the actual tools – I used them in this site. People sent their photos and I used these too. There have been a lot of discussions about “who, what, when, where and why”. In some cases I have had 10 or 20 copies of a tool in front of me, other times, not a single copy. Other people have proofed large parts of this site – and their aid has been invaluable. . (The spelling mistakes are still 100% mine) More feedback and pictures still directly adds to the site and the whole body of information. I want your comments and photos.