Catalog B 1925
Snap on introduced the 9/32 socket set in Catalog B in 1925. Snap on was located on 1270 South Pierce Street in Milwaukee, Wisconsin. The Motor Tool Specialty Company was their sales arm and was based out of Chicago Illinois.  At the time there were a mere 17 offices, but they have coverage from New York to Los Angeles.

The sales literature colorfully reads “Take the tedious work out of small jobs – and speed’ em up – with Snap-On Midgets! Think of the times you’ve struggled with a small nut in a hard to reach place – some little picayune job that wasn’t worth half the time and effort you put on it – then you’ll appreciate your need for Snap-On Midgets”

“Handles and sockets made just like the Master Snap-Ons – same quality, same speed and adaptability in actual use. Guaranteed” The set was minimal and the guaranty, only a year. If a tool broke – mail it back.

A picture of the box and 10 tools is shown. This box is extremely rare and I am unaware of any in the hands of any collector today. The original price was – $2.75 – expensive by the standards of the day. The numbers produced – minimal, but over the next 15 years, the numbers would grow

Catalog C 1926
In Catalog C from 1926, the number of company branches increased to 19 and the return policy changed – The branch offices would now accept returns. The 9/32 socket set tools were unchanged, but the box was new. The first 1926 box is green, later boxes are painted black. There are two types of these boxes. One does not have “Snap-On” embossed or stamped into the lid; there was a decal on the inside of the lid. The transition between this early decal label and the embossed box seems to be between 1931 and 1933. It appears the box color changed from black to gray around this time. The price was still $2.75. The box for the T handles would last until 1945 when the style of the inside partitions changed.

Catalog E 1928
In catalog E Dated January 1928 – The price dropped back to $2.75 and the same set was offered with no changes through Catalog G Dated August 1929. Catalog G still has the early knurled sockets listed. 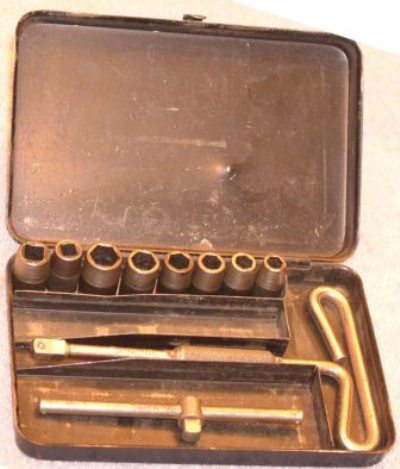 Catalog F Issued May 1, 1928. Snap on had 26 branch offices and 250 sales people combing the countryside. The guarantee was one year from the date of purchase. The black enameled case was basically unchanged and sold for $2.75

Catalog G 1929
Catalog G Issued August 1, 1929. Snap on still had 26 branch offices, the number of sales people had grown to 300 combing more of the  countryside. The guarantee was unchanged at one year from the date of purchase. The black enameled case was basically unchanged but the price was deleted, and there was a 3/8 – 9/16 adapter and a universal joint added to the option list.

Some time around 1930 the Milwaukee marked tools disappear.  Tools marks “Milwaukee” are from the 1920s or very early 1930s. Likely there was existing  stock and there is no one point were this mark stopped being used.

Catalog H 1931
In Catalog H dated January 1931, the same set was offered, but a few additions were made. The M-1 Adaptor to use 3/8 handles with 9/32 sockets and the MU-8 universal Joint was added. Also four specialty sockets were introduced for the Ford Zenith Carburetor used on the Model A. This started a pattern of making special tools for individual purposes. This focus on specialty tools lasted through the remaining 9/32” drive tool history. General use deep socket sets and specialty tool deep sockets can be confusing due to their different lengths; they are not uniform. The ¼” drive set of 1941 is where these specialty tools were unified into a generic set. 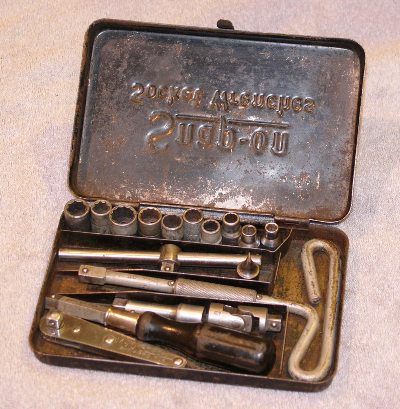 Catalog I 1932
In Catalog I dated April 1 1932, the guarantee changed to a life-time guarantee against defects.  There is a sentence that excludes tools that were abused or worn out through use.  The basic set was up to $4.75 and the bigger set $8.00. Deep sockets for Zenith Carbs and a new ignition handle completed the changes

Catalog J 1933
In Catalog J dated 1933, the guarantee changed to a life-time guarantee against defects.  There is a sentence that excludes tools that were abused or worn out through use. Still 1933 started the famous Snap on life-time guarantee. 1933 was a good year for the expansion of the 9/32” drive set. Additions to the set included a standard screwdriver blade and a screwdriver-like handle labeled M-5 that is rare. The screwdriver blade must have been a wear/damage item since very few remain. The first midget extension was also added at this time.

The most interesting addition is a ratchet – rarely seen and labeled the M-70, that was replaced quickly and likely started in late 1931, and ran through 1935.

Catalog K 1935
In Catalog K dated June 1 1935, Boasted 34 branches and 450 salesmen. the guarantee reserved the right to judge if the tools were abused. The midget sets and accessories were up to 3 pages with screw driver bits and another set of ignition handles. 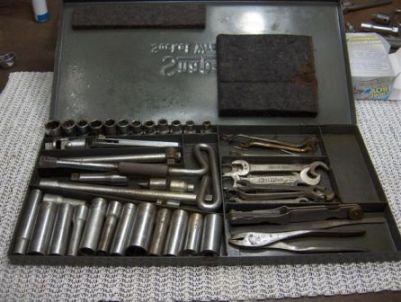 By Catalog M dated 1937, Snap-On had grown to 38 branch offices. The guarantee changed to list wear as – Covered. The original 10 piece set was still available and now priced at $3.75. The M-70 Ratchet was gone and replaced with the M-70N. This is a better ratchet by far, but lacks the charm and the rarity of the M-70.  The GM70N was the same ratchet, but had a ¼” square drive installed and marks the beginning of the end for the 9/32” drive. A Nut spinner – the M-10TC was introduced. These are also not common. A new ignition tool handle, made of Pyralin, which was a better insulator, was introduced.There was a set of deep sockets, the SM series, which started to establish a generic set of tools vs. the specialty deep sockets running before 1937. A longer extension, new standard screw driver blades (not guaranteed) and a set of three hex drivers rounded out the expansion.  It was by far the most complete offering to date.Catalog N 1939In the 1939 Catalog N 35 branch offices were listed. The front of the catalog features a display of the tool manufacturing steps. The guarantee policy was modified to place a black star next to the tools that were not covered by the normal guarantee – basically impact tools and screwdrivers. The sets expanded again and a new box was introduced. The 63-B became the small tool storage unit. These are commonly found and are a novel design.

The standard 10 piece set still existed, but was in a gray box with the embossed logo on it. The same box stuffed with tools was the No.55 Midget set, the next level was the No.63 Midget set – the biggest collection. The ignition handles switched away from wood to Pryalin.

1939 added an adaptor from 9/32” to ¼ inch drive – bringing the realization that in only a couple of months the 9/32” set would be replaced with the ¼” drive. ¼” drives existed in large numbers outside the Snap-On world.

Two Philips screw driver bits were added. The deep socket set, the SM series, extended its range by one size. A flexible 6 inch extension was added, the ratchet version changed (most noticeable in the reverse switch design)

The M-45 Spinner was added but not shown.  These are commonly seen, but harder to trace down because they were not pictured. Still, they are easy to find.

The M-27 butterfly driver was shown but not described. It first appears in 1939.

In the supplemental section, a set of metric sockets first appeared. 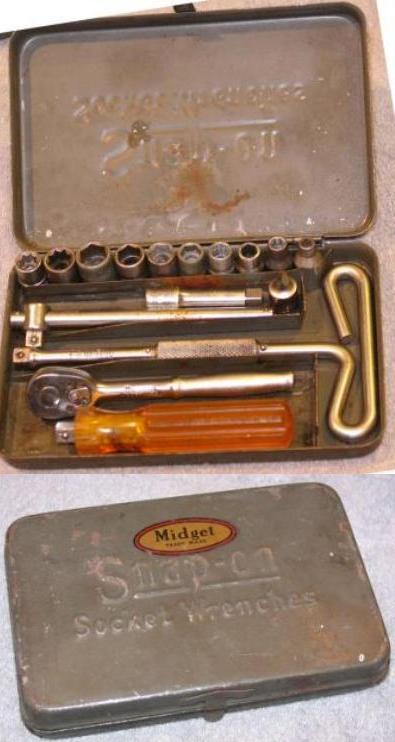 Catalog O
In the 1941 Catalog O, Snap-on was producing huge numbers of tools for the war effort. The first notes about metric and Whitworth sizes for their customers working on machinery overseas appear. There was a different supplemental catalog showing these.  The 9/32” set was basically unchanged for 1941 with a few notables:

Philips screw driver bits and Allen head sockets both came out with replaceable bits. Allen head came with short and long bits. A new adapter for ¼” drive completed the ability to use any handle and any socket with ¼ drive.

Catalog P
In 1942 Catalog P had an important notice:
“Because of increasing costs and future uncertainties in the raw materials market, it is impossible to guarantee prices.” It goes on to state the price will be set at the time of shipment and design changes may occur – clearly the war effort was consuming materials Snap-On needed (like chrome) and was having difficulty getting at all. Pricing, which was listed in earlier catalogs, was now dropped. This may have been debated, because the label “price” and a series of dots leading to where the price normally would be, remained, just the actual numbers are missing.

The marketing target for the use of these tools had dramatically expanded to include movie projectors, typewriters, office machines, sewing machines, and gas, electric and water meters.

The 1942 catalog appeared basically the same as the previous catalog.  The development of the 9/32” had stopped. In the next catalog, no 9/32” tools were offered at all. In its place – a full line of ¼” square drive tools that remain the standard today. No reason as to why the 9/32” sets were discontinued was offered in the catalog.  There are a couple of obvious hints:
The size differences between the ½” and the 9/32” are dramatic. With the introduction of the 3/8” drive, they may have wanted something a little smaller. The industry standardized on ¼” drives, and with the military business so important and a drive to reduce costs and standardize, it may have been government driven. The 9/32” drive tools are chromed, while the ¼” drive war tools are not. Snap on may not have been able to keep the older finishes and materials at the same time they were working on standardization, and dropped the whole non-military effort and the line with it. 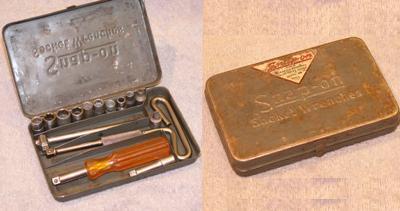 People like you make “collectingsnapon” work. Where I had or have access to the actual tools – I used them in this site. People sent their photos and I used these too. There have been a lot of discussions about “who, what, when, where and why”. In some cases I have had 10 or 20 copies of a tool in front of me, other times, not a single copy. Other people have proofed large parts of this site – and their aid has been invaluable. . (The spelling mistakes are still 100% mine) More feedback and pictures still directly adds to the site and the whole body of information. I want your comments and photos.