The “Ferret” sets, 3/8 inch drive set, started in 1927. It appeared in the “D” and “DW” Catalogs. (The “W” turns out to be West – prices were higher in distance areas and had a different catalog)  These were complements to the ½ drive sets. As machines became more complex, the need to reach into tight spaces increased.

The name “Ferret’ is an interesting choice. In 1920 the US population for about 105 million.  The country was in transition but much of the population was rural. Ferrets were familiar. The word “ferreting” was about going down holes chasing small animals, and routing out hidden places. The ferret got into places others could not.

There was no ratchet for the 3/8-inch drive, but the need existed. To address the gap they created a plug to fit the ½ ratchet to the 3/8 sockets.  This appears in the 1927 Catalog (D and DW) and remains there until Catalog G (Aug 1, 1929) when the F-7 Ratchet appears. 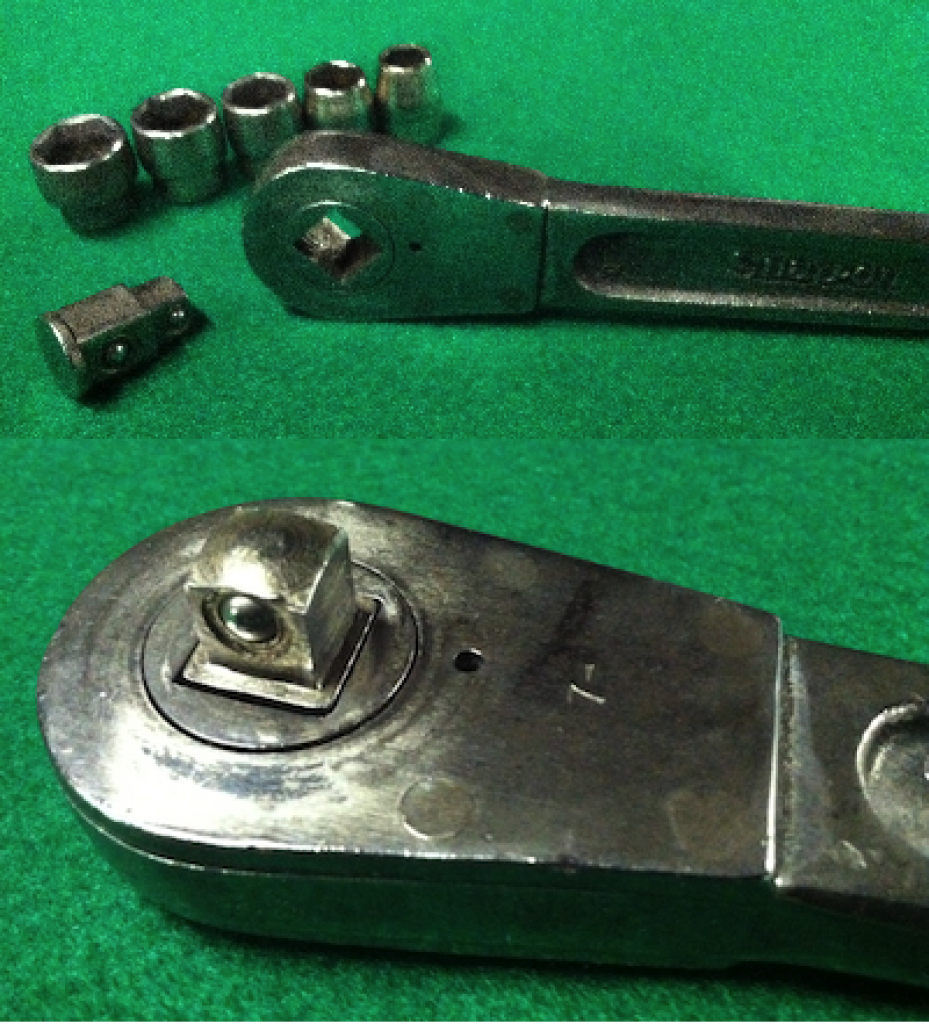 The internal workings of the F-7. Photo courtesy of Ben Hill who repaired this ratchet with a new spring and paw.

It has a captive plug. It is held in with a swedged pin in the gear assembly.

It is also mechanically different that the half inch ratchets.   All the examples I have seen are stamped 1929, but a 1930 stamped ratchet does exist.

Internally the half inch ratchet has 2 rectangular paws engaging a gear with shape angular teeth.

The F-7 has a single circular paw engaging a contoured tooth gear. This design does not seem to exist before and is not used after. It is interesting that the half inch ratchet was promoted as superior to a single paw ratchet – stronger and better. This is the single paw ratchet Snap on was making at the time.

The ratchet is marked MILWAUKEE USA and PATENT APPLIED FOR. This is the only 3/8 ratchet made in Milwaukee, all the others are made in the new factory in Kenosha, Wisconsin.

The first iis a F70 from 1931. It is unique and has a wide lever. Photo courtesy of Ken and Roseann Johnson

The F70 in 1931 was the introduction of a “remarkable new ratchet” with a reverse with a flip of the thumb. No more plugs, no push through, the number of teeth increase to today’s standard on 20, the cover was removable.

Up to this point the internal gears were riveted in the ratchet.  The F70 has a press fit cover. The 1931 is rare and have a wide lever

The first cam ratchet is a F70 from 1931. It is unique and has a wide lever. This 1931 F-70 has a press fit cover. Removing the cover has a hint as to why this ratchet was short lived. The design of the spring is unique. There are 2 springs in the shape of a heart. This have a 90 degree bend and ride in the center of the cam parallel. The picture shows how these springs ride against the cam.

As the ratchet is levered from “on” to “off” the springs are shifting from right to left. It is a complex and weak design. The ½ ratchet wit this spring configuration has not been found (to the best of my knowledge). It is obviously a design that was improved quickly.

These ratchets suffered from some problems.

Cost and Complexity: The cover is a press fit or an interference fit. There is a lot of machining in these covers. The recessed area is a relief for the “S” spring. The lip of the cover is thick – it bottoms out and insures the cover is not too low. This machine work requires tolerancing, and is not cheap.

Dirt: The cavity also is space where dirt and hardened grease can interfere with the spring. Spring design.

Alignment: The cover also has a pin that is a press fit into the cover. There is no stress on this pivot point when assembled, but the spring pulls the cam off center when opened, so getting the cover pin in the hole, pulling the cam into position and pressing the cover into pace can damage the pin if one is not careful.

The Spring: When the cover is pressed in, this relief allows the spring to move, but it still can rub. As the spring rubs, it wears. Broken springs, and pinched springs all highlight the fragility of this design. Removing these design flaws is the goal of the next design

The “S” spring ratchet’s weak point is the spring itself.

The next improvement was reworking the spring location and the way it functions. A lot is made of an oil hole in the crown or top of some ratchets. It implies you need to oil the ratchet. It is critical, but not for oil. It is a manufacturing detail.

Need a hole: If one looks at the new spring location it needs a hole. This hole is in a cavity, so how can a machinist make a hole in a cavity?  The answer is to drill through the cavity. Then there is an unwanted hole in the crown. A press fit spring-loaded cap is inserted and – An oil port is formed. Other ratchets do not have this port – they don’t need it. It is not for oil, it is the axis of the travel for the drill bit to cut the spring hole.

Spring and Ball: The photo also shows the length of the spring and the ball bearing riding on top of it.  The hole needs space to bottom out, so the boss of the ratchet is extended to provide the needed metal. Some earlier ratchets do not have metal here – they do not need it (No hole).

Cam Shape: The cam is shaped with 2 conical depressions to center the ball and provide the “click” to engage the cam right of left. Modern ratchets have a V rather than the cone, but the function is the same.

Changes in the cover: This relation of the spring also removes the need for machining the inside of the cover. No lip, cavity or pin is required. The pivot point is now a “round” in the gear – a much stronger and simpler design.

Length of use for the design: This design has minor variations but is basically the modern design. It is strong, simple, and inexpensive and is not in use for about 80 years. I wonderfully simple, elegant solution from 1934. This is a adaptor converts any handle into a ratchet.  It traces origin back to a manual ½ adaptor introduced in 1923.  There is a ½ version of this as well. It is useful with torque wrenches.

1937 brought an end to the flat ratchet design and a new thumb switch.  This is the classic shape that would run solo for 10 years until 1948 and against the redesigned ratchet until 1960 – a 23 year run. Production of these exploded with WWII production needs.  There was a shortage of all materials including chrome. Shown here are 2 ratchets, both F-70-N one in chrome and one in an industrial WWII finish.